Below the Mola Mountain. Forests, pathways and Excursions

By starting off your itinerary from Pradell de la Teixeta and continuing through La Torre de Fontaubella, Marçà, Falset and Capçanes, you can see from the road the landscapes offered by La Mola de Colldejou. If you wish to travel on foot, there are pathways setting off from all these locations into the forests and the majestic scenery of La Mola, 859 metres above sea level, from which there are excellent vantage points.


You enter the Priorat region along the N-420. Here, between Porrera and Falset, you will see a turning off to PRADELL DE LA TEIXETA, a town lying 2 kms off the main road. This is a small town lying at the bottom of a small valley marked off by Pradell and La Teixeta mountain ranges. From Pradell you can see the enormous mountain of La Mola as well as the Llaberia range. As you can imagine in the midst of so much nature, the trekking possibilities are considerable. One of these is to climb into the Pradell range and go all around it by following the PR that crosses it. Additionally, important prehistoric discoveries have been made in its municipal area: a pit grave with its associated household goods, five or six burial chambers with axes, flints, necklaces and ceramics, among other articles. The original design of the parish church (begun in 1771) is interesting, as it has an octagonal-shaped base for the nave, which is unique in the Priorat.

You head on in the direction of LA TORRE DE FONTAUBELLA. This is a picturesque little town, dominated by the presence of La Mola in the midst of cool, wooded landscapes with an abundance of water. The most interesting excursion to make around the immediate  area is to climb La Mola, an itinerary that is well signposted from inside the town itself. La Mola strikes you for its majestic character, with a completely flat summit from which you can see wide expanses of country on clear days. You can catch sight of the Mediterranean, the Cape at Salou, Colldejou, Mont-roig, and the towns on the coast. You can also go on excursions to the "ghost village" and mountain range of Llaberia, and the Argentera range.

The following town that you come to is MARÇÀ, lying on flat terrain amid fertile fields. Worthy of mention are the Baroque church of Sant Joan, the Lula Pérez - MarçàGiné Sculpture Museum (Museu Lula Pérez-MarçàGiné), and the the Interpretation and reproduction centre of the Hermann tortoise. If hiking is what you want, you should make for La Pallissa (a signposted itinerary), where the Marçà watercourse acquires greater depth and where there are several fountains. If you wish to get even closer to nature you can make for the defile of Catà or, if you do not wish to walk too far, simply walk from La Miloquera.


You can then visit the town of CAPÇANES, surrounded by vineyards on the one hand, and the thick forests of the nearby hillsides, on the other. Capçanes was the birthplace of Carrasclet, the famous guerrilla and patriot who fought on the side of the House of Austria, and his statue presides over the way into the town. You can visit the parish church and go as far as La Font de Santa Rosalia or Les Canals, a leisure area 300 m from the town. Nearby there exist excepcional cave paintings (guided tours). For lovers of trekking we recommend going as far as La Fou, a location of exceptional beauty where the watercourse of La Vall rises. You take the local TV-3031 road as far as the N-420 and continue to your right as far as Falset.

You finish your itinerary in FALSET, the district capital, where you make a stop. It is worth making a visit to the Cooperativa Agrícola Cellars, a Modernist building designed in 1919 by Cèsar Martinell, a disciple of Gaudí. Other points of interest are the archpriest church of Santa Maria, the Mediaeval castle of the Counts of Prades, today the regional museum, the Portal del Bou, the arcaded Plaça de La Quartera with the Palace of the Dukes of Medinaceli (1630), the present-day town hall building, the Palace of the Counts of Azahara (18th century) and the marvellous red rock landscape by the Sant Gregori hermitage, 2 kms away from Falset in the direction of Reus. There are several signposted itineraries for trekking in the surroundings of Falset which will certainly delight you: the road to Els Masos, the route to Les Ermites, Les Aubagues, Les Pinyanes, Les Sentius... 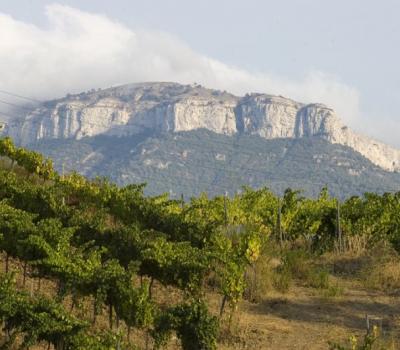 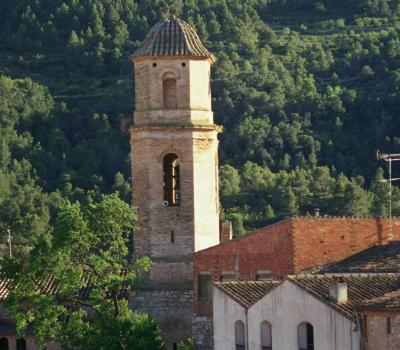 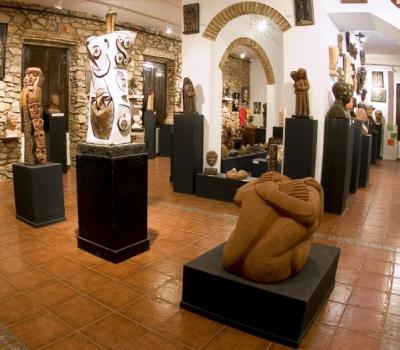