A trail in the westernmost area of Montsant, recommended for those who want to enjoy direct contact with nature, drink in the landscape and take spectacular photographs.

The ascent goes gradually into the Barranc (gully) de la Taverna, while the final stretch allows us to enjoy one of the most prized treasures of Montsant, the thousand-year-old yew tree. Arrival at the crest of the Serra Major and the descent over the uplands provide a spectacular panoramic view of the large number of gullies that originate in this part of the massif. Finally, a steep descent through the woodland takes us back to the banks of the Montsant river.

This walk requires plenty of time to enjoy the landscape and takes a full day. The descent requires some experience in orienteering on mountain paths and has some elevated stretches that may affect people with vertigo.

This hike is highly recommended for autumn and spring, when the deciduous trees have their full foliage. It can also be done in summer, as the path goes through shady areas for much of the distance. The trip should not be made in fog. Great care should be taken if the rocks are damp.

The walk can be completed with a visit to the Cova de la Taverna, a cave for which you should be equipped with a helmet and head lantern and which takes at least an hour.


DIFFICULTY LEVEL: HIGH (not suitable for children or people with vertigo)

Leave the recreation area below the dam of the reservoir, where cars can be parked. Doubling back slightly, look for a wooden signpost that marks the path to Ulldemolins. Cross the river over the cement ford and walk uphill as far as another signpost for the path to Ulldemolins, which starts from beside the dam. Continue to the suspension bridge. From there you will see a path leading to the Cova de la Taverna |3.1|. Leave this path and immediately after climbing the first stretch of railway sleepers which serve as steps, there is a half-hidden path leading off to the right. This path leads to the Barranc de la Taverna. There is a wooden signpost indicating La Cogulla, although it is not easy to see. The path is easy to follow, but the stretch beside the waterfall is more difficult and requires some clambering. At the top you will come to a point where two paths cross. The path leading to the Racó del Teix |3.2|, the location of the ancient yew tree, is marked by a wooden sign and goes straight on. A single rock confirms the route. After passing the rock, you will come to La Cova del Teix (the Cave of the Yew). To continue the ascent, rejoin the path and climb up to the top of the Serra Major. Take the path to the right, which leads to La Cogulla |3.3|.

To begin the descent, look for the path that begins below La Cogulla, which is marked with piles of stones and orange paint marks. Take care not to miss it. The path follows, with slight variations, the saddle of the hill that separates the Barranc (gully) de la Taverna on the right from the gullies on the left: La Coma Negra or Teixeta gully, firstly, and then La Coma Closa after that. At some points the trail is quite high. After the first small hill, you will pass the path that leads down to La Coma Negra on the left. To reach the end of the ridge, some scrambling is necessary between two rocks. From now on the descent is continual and passes through woodland on the side of La Coma Closa. Some way along you will go down the Grau (slope) de les Figueres and pass L’Obac del Roger. When you get to the river, continue upwards to the car park. 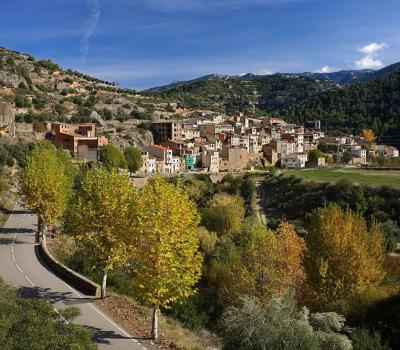 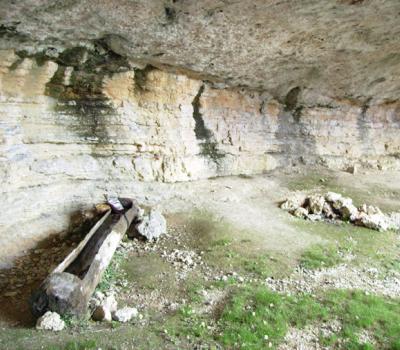 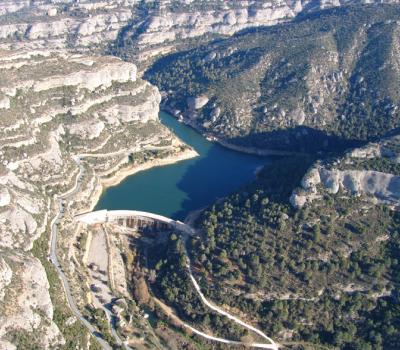