A trail from the slatey environment characteristic of the lower part of El Priorat region to the first limestone cliffs: Els Montalts. The ascent and descent use old, steep paths, which are unsuitable for animals, which we can climb the cliffs. This is a trail designed for those who want to enjoy a rocky environment and who are curious to know about the ways of life in the past.

There are two parts to the excursion. One is longer, to the way up or down the cliff, and the other shorter, but much more exciting, through the passes.

The approach follows the bed of the Scala Dei stream, which is present on parts of the route. The rest consists of following the drove roads that led from the village to the highest fields on the mountainsides and finally to the foot of the steeper paths.

This trail can be completed in a morning if sufficient time is allowed. It requires a certain degree of experience in climbing over rocks and is strictly not recommended for children and those who suffer from vertigo.

This trail is not recommended in very sunny weather, as much of the walking takes place through crop fields, many of which are abandoned, which offer no shelter from the sun on this sunny side of the mountain range. This walk should not be done in fog or if the rocks are damp.

DIFFICULTY: VERY HIGH (not suitable for children or people with vertigo)

The departure point is the village square. Walk down to the T-702 road on the street that passes the Cooperativa. In front of this, beside the old Trade Union building, the path that leads down to the Scala Dei stream leads off, marked with blue paint. Follow this path to the right, first as a track, then becoming a path, leading closely alongside the intermittent watercourse. You will come to the spring known as the Font dels Aubins |6.1| equipped as a rest area. Here, take the cemented track climbing up to the left, which leads to various fields. When you reach the end of the ascent, take the path to the right, which leads first through abandoned fields and then below a canopy of pine trees. When you reach a cultivated vineyard, leave the track and take the path leading off to the right, in order to descend to the Tormo del Frare |6.2|. A short stretch of the path passes alongside a vineyard before meeting the path that allows you to ascend the steep slope again. Continue climbing for some time, first surrounded by olive groves and then walking alongside abandoned fields. The path leads to the foot of the cliff. You will see a gap in the cliffside with the sides of the path leading up. Climb this path until you reach a vertical wall, where a landslide has destroyed the last part of the path. You need to use the steel grips to climb up. Beyond this stretch, you must still climb a little further and overcome another vertical section, this time without grips.
Once above the cliff, turn left, beside the vineyards, and climb gently through the various flat stretches with crops until you reach the ruins of Mas Déu |6.3|, following the blue markers. Nearby are the half-hidden remains of the Font del Roure spring.
From this point, after stopping a moment to take in the view, we head back down. The blue marks will lead you to a vineyard with a large holm oak tree in one of the stone borders. Pass the oak tree and head towards the cliff. A large oak tree marks the spot. To the side of it is a pine tree that was hit by lightning. Here you will find the path of the Grau de la Vilella |6.4|. The rocks laid in the form of steps and the steel handrail will help you to descend safely. Once at the foot of the cliff, you will pass the Cova Roja (Red Cave). From here you will begin the descent, which is long but easy to follow, between abandoned fields. At the end of the descent, you will again come to the Scala Dei stream, which you should follow for a short spell. We go up the other riverbank until we come to the old Trade Union building, and from there climb up to the village. 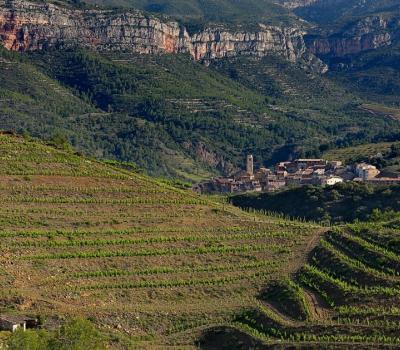 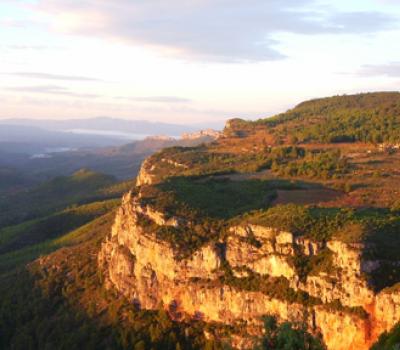 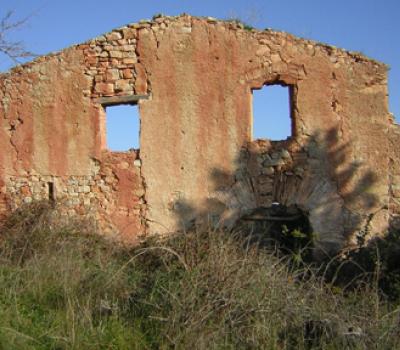