The Carthusian monastery of Escaladei, founded in the 12th century, is the reference point and compulsory visit to see the Priorat region. The Carthusian monks made a decisive contribution to the cultivation of the vine and nowadays, their former land makes up a large part of the DOQ Priorat (QDO in English). Characterised by the slate slopes,  its wines are a reflection of the severe climatic conditions and the peculiarities of the land contours. The presence of monks up to the mid-19th century decisively favoured the cultivation of vines and the quality of a product that today enjoys international prestige: the wines of the Priorat QDO.

The Priorat wine route gives you the opportunity to visit a wide range of cellars that you find spread over all the villages included in our proposed tour by car.

One of the towns protected under the Priorat QDO is BELLMUNT DEL PRIORAT (you get here along the local TP-7101road from the N-420 when you are in Falset). Here you can see different high-quality cellars. With its mining history, it has all around it the evidence of an activity that lasted for centuries and shaped its character. Worth mentioning are the Lead Mine Museum (Museu de les Mines), which was a Modernist building from which the mines were administered and where there was a laboratory (Casa de les Mines, 1905), and the housing quarters for miners. The original feature of the little town is characterised by its white bell tower, the only one of its kind in the Priorat.

By following the road you come to EL LLOAR. This is on the old road from the Ebro to Tarragona that was taken by generations of travellers. There are some very characteristic narrow streets and viewpoints overlooking the River Montsant. One picturesque corner where you can spend a little time is to be found at "La Font Vella", and at the spot known as "Els Rogerals", when you can see red sandstone rocks in curious formations (you get here along a signposted path that also leads to the old fountain of Minfami, of Arab origin).

GRATALLOPS. This is one of the leading centres of the widespread wine production of today. In its municipal area you will see in addition to the Co-operative, the Vinícola del Priorat, which brings in the grape harvest from the small, neighbouring villages, different well-known cellars. The picturesque La Consolació hermitage, standing halfway between Gratallops and La Vilella Baixa, looks down over the landscape.

The Regulating Council of the Priorat QDO has its headquarters in TORROJA DEL PRIORAT. It still has interesting details of former times in its streets, which are paved with pebbles taken from the river and, above all, a Baroque organ in the parish church of Sant Miquel which has recently been restored. In the Joan Pàmies Cellar-Museum (Museu-Celler de Joan Pàmies) you can see a private collection of winepresses and other old wine-making implements, among other agricultural tools.

PORRERA is a town surrounded by hillsides with almond trees and vineyards (the Garnacha and Carineña varieties) in which several important cellars have established themselves. You will notice the presence of old manor houses, many of which display old sundials, as e.g. the Ca l'Amorós house-museum, some of great interest, among which you can see the largest one in Catalonia. Other interesting places are Sant Antoni Abat hermitage (1610), the 18th century parish church and the bridge over the River Cortiella.

POBOLEDA. The ancient "Populeta" on the River Siurana was the place where the Carthusian monks resided while the Carthusian monastery of Escaladei was being built. Top-quality wines are produced on its slatey slopes. There is a large-sized church dedicated to Sant Pere, known all around the area as the Cathedral of El Priorat, as well as streets with mansions with lovely voussoir arch doorways. There are some other lovely locations like La Font d'en Mingot, 1 km from the town.

You return to the C-242 and continue your itinerary as far as Cornudella where, just before you enter the town, you take a local road on your left-hand side (the TV-7021) that leads to Morera de Montsant. LA MORERA DE MONTSANT. This is an old town of Saracen origin beneath the cliff faces of the Serra Major de Montsant. It still has a Romanesque entrance way to the parish church. The ruins of the old Carthusian monastery of Escaladei and the little town of the same name are to be found in this municipal area.

The little town of ESCALADEI, the former monastery buildings was the headquarters of the business interests of the entailment in the time of the Carthusian monks. From here one of the monks directed the workers, monks or otherwise, who looked after the cellars, livestock and various cultivated crops. Today, it is a delightful spot with an ancient little church surrounded by manor houses and important wine cellars. Today, the ruins of the Carthusian monastery of Escaladei are a monument included in the network of monuments managed by the Museum of Catalan HIstory (Museu d'Història de Catalunya).

LA VILELLA ALTA is a tiny village perched on top of a rise very close to the Serra de Montsant (the southern slopes). The parish church has an altarpiece from 1700 and an olive oil mill, which mills the olives from the surrounding villages as part of the "Vinícola" co-operative.

LA VILELLA BAIXA, a very picturesque town with difficult, narrow streets to climb like "No Passa" street, a clear testimony to Mediaeval times. Also worthy of note is the church of Sant Joan Baptista. The bridge over the River Montsant, with the background of the very tall houses that are so characteristic of La Vilella Baixa, offers an unsurpassed view of the town. 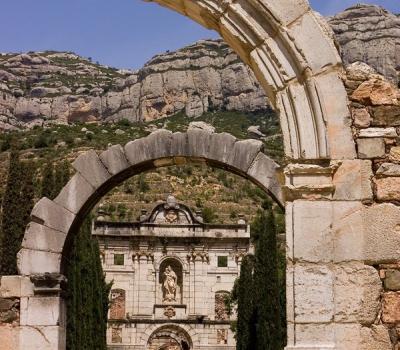 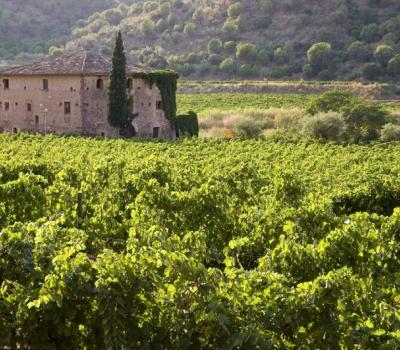 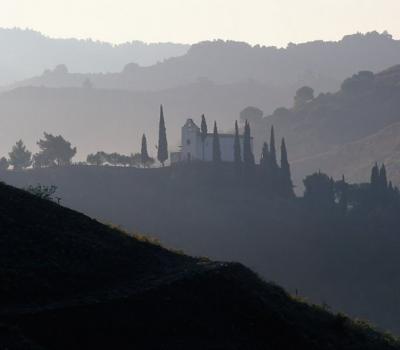