This route is sponsored by the rural house L'Era in la Torre de Fontaubella
(You can book at: http://www.l-era.com)

Suggestions: This is a demanding route, aimed at experienced walkers. The consortium which manages the nature reserve of Mola de Colldejou and Serra de Llaberia have re-opened several traditional paths and regularly organise guided walks and activities to get to know the area.

The Mola de Colldejou is a great mountain shared by both Priorat and Camp de Tarragona regions alike. Viewed from the coastal plains, its silhouette is easily recognised with cliffs which constrict its slopes as if in a corset and its flat-headed top is like a great long balcony, which splits the land down the middle from the Penedès mountains to those of the Ebro river valley; all this with the luminous Mediterranean as a glittering backdrop. The trail we suggest follows the two main traditional paths which ascend the Mola and which provide a delightful hike, enjoying the character of this much loved mountain.

The route starts at the church (1) and leaves the village by taking the steps on Carrer De Dalt  (De Dalt Street) and then traverses the main road. We will find a hard surfaced farm track with a signpost which indicates the start of the walk (2). As the path twists between olive trees and almond groves it becomes a dirt track and meets up with the old trail which elegantly ascends as it reminds us of days gone by. We continue in a south-easterly direction and a path leaves the track to our right and heads towards some beehives. A few metres later on, we hit another path which descends from the main road. At this point, the path becomes straighter and narrower and crosses between former dry stone walled terraces until it reaches a fallen-down stone structure. Keep straight on, ignoring any paths to our left or right.

We are rudely brought back to reality as we hit the main road (3) with the constant and rhythmic sounds of the wind farm. We follow the road part of the way until we reach a dirt track to our right (4). In a short while, this track bends sharply to the left and joins the GR 173 (European Hiking Network Long Trail) (5). Follow the GR red and white painted trail markers and signposts which head towards the Mola. The path slowly penetrates the wood and becomes shady. As we come out of the wood, the path climbs decidedly upwards to reach the escarpment at the entrance to the Cova del Llamp (cave) and then up onto the higher plain which crowns the mountain and where we can find the former Carlist look-out tower dating from the 19th century (6).

We continue following the painted trail markers whilst encircling a large water hole for the herds of local sheep and goats. We commence our descent via the Portell de les Processions path (7) which leads us directly to the Coll del Guix (8). We keep straight on here, following the Vall de Massanes path and the red and white markings of the GR 7 until we reach the next crossroads (9). We leave the GR  and head downhill, following the white and yellow painted markings of the PR (European Hiking Network Short Trail). A little while after having left the Massanes water pool,  on our right, we come to the old pack-horse trail which takes us straight to the village of La Torre de Fontaubella (10) and which still to this day has kept some of its old cobblestones. Finally, we emerge onto a concreted farm track (11) which takes us back into the village.

Attached files
A rocky fortress on the cliffs.pdf
Image gallery 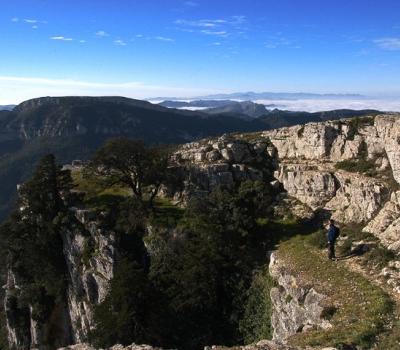 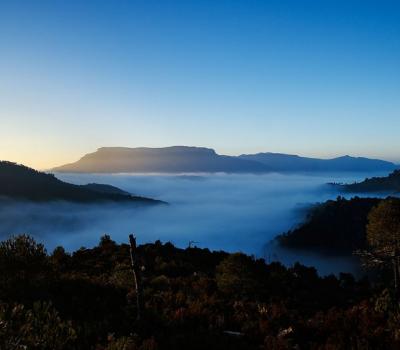