On the trail of ancient settlers

Take a step back in time in this area of Priorat, when the banks of the great Siurana River saw the settling of a people on the peak of the nearby hill. They were probably the first miners of today’s county and lived here some three thousand years ago. A group of men and women cleverly chose to settle on a crossroads which linked today’s Priorat with the banks of the Ebre River by way of the Siurana River. They were also connected to the west via its tributary, the Montsant River. These were men who lived out the last few years of prehistory and also came into contact with other cultures that already knew how to write. They most probably participated in a new funerary ritual: the cremation of the dead.

The Puig Roig (Red Hill) settlement was discovered by chance when a villager was hunting for wild mushrooms and he found an urn. From the Seventies onwards of the last century, work started on investigating and excavating the settlement. This exceptional discovery has meant that today, we can contemplate the almost complete floor plans of one of the most primitive houses of Catalonia.

We suggest you went on a simple stroll to discover this fantastic spot. It is ideal for exploring with children and the walk can be extended if you leave from the village and take the paved farm track which leads to Les Pinyeres hermitage and Siurana River. In this case, the route is 9 km there and back.

If we start the walk from El Masroig village, we leave the car next to the Celler el Masroig winery and walk down the Carrer de les Pinyeres (Pinyeres Street) towards the Barranc de la Vila (Village Ravine). We cross the ravine or dry river bed and keep following the paved farm track towards the hermitage. This magnificent spot is worth a short stop to enjoy the views over the Siurana River. From here, we can also contemplate several Priorat villages as well as the Montsant mountain range in the distance. About three hundred metres further on, we leave the paved farm track to take a cart track which is to our right, signed as Sender del Puig Roig.

If however we wish to drive here by car, we take the paved track which leads to the hermitage, leaving the village near the cemetery and we follow it until we reach the chapel. We can leave the car here and continue on foot or alternatively, we can follow the track until we reach the Puig Roig cart track.

The track heads into woodland and continues parallel to the Serra de la Cova Santa (Holy Cave Mountain) where the now disappeared primitive statue of the Virgin Mary of Les Pinyeres was said to have been found by a shepherd after the abandonment of the former town of Les Pinyeres. As soon as the track starts, we are surrounded by deep red clays and red sandstone rocks which are abundant in this area and which have bestowed this area with its name. Soon we will be able to see the little hill of Puig Roig, f lanked to the left by the Serra de la Figuera (Figuera Mountain) and to the right by the cliffs of the Serra de Montsant (Montsant Mountain Range). Below us we can contemplate the fertile vineyards around the banks of the Siurana River. We keep straight on and cross through terraces of vineyards and olive groves. The track veers left below the dry stone wall terraces and enters woodland again. On the right, we continue to find remains of low dry stone walls which prove that these lands of pine trees and heath land had once been farmed. We continue along the same track, passing to our right a path leading to Bellmunt and we come to an olive grove. We skirt to the right around the land until we come to the next point. Here we will find a signpost which indicates the track we must follow, which enters woodland once again. After leaving a small stone shelter behind us, we reach the foot of the Puig Roig hill. We will see here large red sandstone rocks which guard the entrance to the settlement.

By using information boards and an itinerary marked out by ropes, you will be able to discover this settlement and its former buildings. You will get to know who its inhabitants were and how they were forced to leave after there was a great fire.

Attached files
On the trail of ancient settlers.pdf
Image gallery 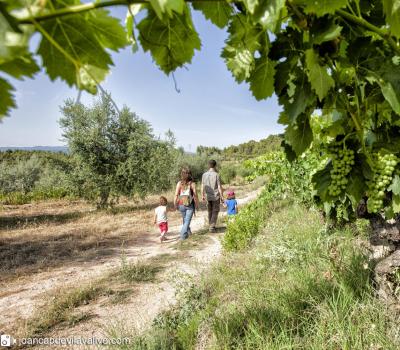 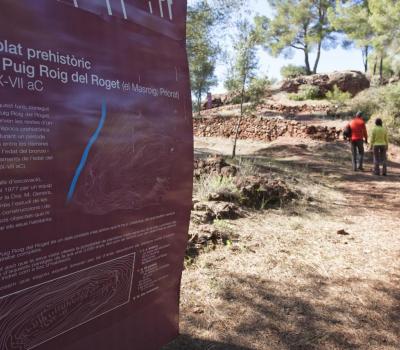 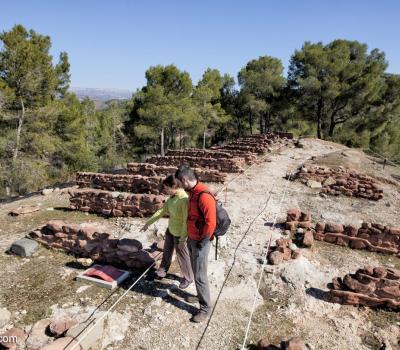