The itinerary suggested here takes you on a journey around the small towns of the Priorat region which base the larger part of their agricultural activity on the production of olive oil of the finest quality, with Siurana Designation of Origin. The most outstanding variety is the Arbequina, which was introduced into this region in the 16th century by the Duke of  Medinaceli.

Characteristic of the area are the terraces planted with olive trees that overcome the variation in height via dry stone walls, all of which lends itself to a most peculiar landscape. The harvesting of olives by hand (which enables the farmers to determine the optimum moment of their growth), the extraction of the oil by simple pressure at low temperature and the selection of the first pressing are the only criteria accepted for obtaining this oil, as well as being the factors that determine its low acid content and smooth taste. The agricultural co-operatives, where you can taste and purchase new oil, play an important role in the production and marketing process.

You enter FALSET along the N-420 road. This is the regional capital, where you will see the important Modernist building that houses the Cooperativa Agrícola, designed by Gaudí's disciple Cèsar Martinell in 1919. Other points of interest are the parish church, the Mediaeval castle of the Counts of Prades, today the regional museum, the Portal del Bou, the arcaded Plaça de La Quartera with the Palace of the Dukes of Medinaceli (1630), the present-day town hall, the Palace of the Counts of Azahara (18th century) and the marvellous red rock landscape by the Sant Gregori hermitage, 2 kms outside Falset in the direction of Reus.

You come straightaway to the town of MARÇÀ, lying on flat terrain amid fertile fields. Its Cooperativa Agrícola has got an oil mill with the most up-to-date technology, which brings in the olive crop of several towns. Also of interest are the Baroque church of Sant Joan, the Lula Pérez-MarçàGiné Sculpture Museum, and the Center for the interpretation and reproduction of the Hermann tortoise.

EL MASROIG. This town is surrounded by a red earth landscape that conceals legendary out-of-the-way spots like La Mare de Déu de les Pinyeres hermitage and the proto-historical settlement of El Puig Roig del Roget (9th-7th centuries B.C.). Its cellar co-operative is at the forefront of both wine and oil production.

EL MOLAR still has Celtiberian and Roman archaeological remains in the district of Mount Calvari and the old fountain, where you will see a field enclosure with urns (numbering 172 urns). Like some other towns in the area, this town was famous for its mining activities, with digging for lead, baryta, manganese and the popular clay or earth that served in times past to remove grease stains. You can visit the Mina Loussa i Linda Mariquita interpretation centre, former mining company buildings that during the Spanish Civil War housed a field hospital and a school.

LA FIGUERA will surprise you with its extraordinary view over the region and surrounding areas, which you catch a glimpse of from different lookout points like that of the Balcó del Priorat (the pass of Els Solans), that of El Guixar or that of Sant Pau hermitage. Nor should we forget to recommend the typical dish of the town: crestes de La Figuera.

You come to LA VILELLA BAIXA, a very picturesque town with difficult, narrow streets to climb like "No Passa" street, a clear testimony to Mediaeval times. Also worthy of note is the church of Sant Joan Baptista. The bridge over the River Montsant, with the background of the very tall houses that are so characteristic of La Vilella Baixa, offers an unequalled view over the town.

LA VILELLA ALTA is a tiny village perched on top of a rise very close to the Montsant Serra (the southern slopes). The parish church has an altarpiece from 1700; but most worthy of mention is the olive oil mill, which markets a high-quality product. You re-take your route as far as the turning off to La Figuera and you keep on to your right along the T-702 as far as Cabacés.

Another small town in the area for good oil is CABACÉS. Its land once formed part of the Barony of Cabacés, a name that has been adopted for the oil produced by the town's Agricultural Co-operative, where you can watch the interesting production process. Hermitages of interest include La Foia, Sant Roc and Sant Joan. Worth noting is the Gothic altarpiece of the Borassà school in the parish church. The "Pont Vell",  the Mediaeval bridge, is in a good state of repair. You can also visit the Miquel Montagud Museum in Cabacés.

LA BISBAL DE FALSET is one of the towns with the longest olive oil-producing tradition (it still has remains of the old "Lliura mills" (traditional olive oil mills) and an important annual production. You can see the Cave-Hermitage of Santa Llúcia, where a trickle of water rises up and where people bathe their eyes and cure themselves of problems with their sight.

In MARGALEF DE MONTSANT the rock establishes the direction of the streets, provides support for the houses and decorates the whole enclosure. The Sant Salvador hermitage is interesting. The olive tree provides the most widespread form of cultivation in the area. You can visit the "Interpretation centre on olive oil and the productive economies of Montsant" and the Priordei olive mill.

You can bring your itinerary to a close in ULLDEMOLINS. Its "Sant Jaume Apòstol" Agricultural Co-operative is one of only two in the area that manufacture organic olive oil, a crop favoured by the local microclimate. The olive harvesting process is a completely natural one: plague insects are combated with effective antidotes (predatory insects and plague parasites) and the natural sub-products of the area are employed as fertilisers (manure, vegetable remains). In a similar way, the oil is extracted by taking extreme care over the quality of the product, by working with it fresh. Other attractions are the 16th century Renaissance church, La Mare de Déu de Loreto hermitage, the Sant Antoni and Santa Magdalena hermitages and the Sant Bartomeu Romanesque hermitage, standing in the spectacular gorge of Fraguerau. It is also one of the starting points to many excursions into the Montsant Natural Park. 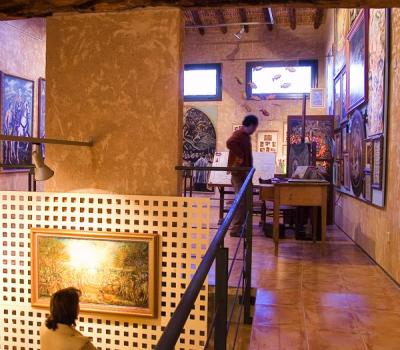 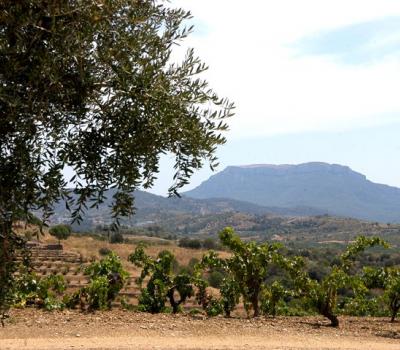